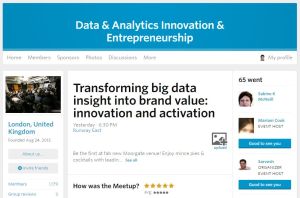 Nice venue, this ‘incubator space’ called Runway East. I had not expected it to be as ‘grand’.

The first person I spoke with was Gabriel Hughes whose company is called Metageni – Creating Data Stories.

I clearly was in my element!

Then I was impressed to see an attractive lady speaking (we are only 12% women in science and technology):

Most complementary presenters were:

Results of the discussion for me were: