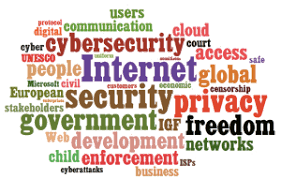 Who rules the internet and how? These were the topics of this day with this agenda.

The first person I spoke with introduced me to the Individual Users Association and I mentioned my recent experiences:

The second session had a panel with Charlotte Holloway as chair, the Brexit Policy Coordinator from techUK: Brexit, what next for UK internet policy?

A BCS [British Computer Society] member pointed out that Euro-DIG is the UK/EU forum for internet governance.

I got so excited that I proposed as solution to follow every face-to-face meeting with an online forum. I wonder who’ll make it happen? After all, everybody knows best… and few listen… Online consultations have a ‘top-down approach’ built in!

I also mentioned that I built a design for Digital Bidding after the Crown Commercial Services [CCS] came to techUK for user research.

The third session was chaired by Seb Payne (FT Comment Editor) @SebastianEPayne: What is the impact of the internet on political debate?

Should there be legislation on petitions like Change.org and 38 Degrees?

After lunch, Russell Haworth, CEO of @Nominet was speaking.

Subsequent discussions were on privacy and security which I just happen not to get excited about, as they are fear-based.

And now the real thing: An internet for children and young people

After a MOST FASCINATING Youth Panel, this wrap up with

For me, there is now an obvious TO DO list for those who listened to the young people and who can make it happen:

Who will come to our rescue?

I'm a mathematician and system analyst formerly at CERN in Geneva and became an event organiser, software designer, independent web publisher and online promoter of Open Justice. My most significant scientific contribution is www.smartknowledge.space
View all posts by Sabine Kurjo McNeill →
This entry was posted in Governance, Governments, Internet, techUK. Bookmark the permalink.