Professor Robert Calderbank came from Duke University in North Carolina to deliver this superb overview over the past 50 years and how data science is the result of that development.

Having created the Information Initiative @ Duke, he presented the Data+ program that attracts undergraduates in an interdisciplinary way and prepares them for their careers. 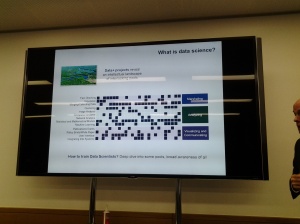 He ‘sells’ them as teams of three rather than as individuals to employers!

In this slide, he shows the three levels defining data science on the right:

On the left he shows the ‘functionality’ or ‘technique’ used, to place projects:

At the end of the talk I asked where he thinks the trend is going, given the financial and cultural gaps between commercial companies and scientific universities. The live stream is gone, but the video will be here. He encouraged the Turing Institute to become the hub for ‘super international leaders’! Currently, five universities are on board. Let’s see what the future will allow us to create with this hub!

I blogged about big commercial and very big scientific data in 2013. Financial data runs and ruins the world. What realities does it reflect???

Can we learn from data about realities?

Wait till the world looks at their data in our new visualisation styles, currently still work in progress.